In the total absence of archives, we don’t know anything about the Park before the annexation of Normandy by the king of France, Philippe Augustus (1204).  On the other hand, it is remarkable that we know, without interruption, the succession of the owners of the Park from the beginning of the 13th century until the present day.

Due to lack of evidence we do not credit the assertions of Robert Asserlin, the learned historian of Port Bail, who, in the Port Bail parish bulletin, attributes the possession of the park before 1204 to the d’Aubigny family.  This author does not cite his sources and we have not found anything permitting us to confirm his claim.

The toponym “The Park” suggests the existence of a feudal park in the medieval era.

The parks were vast expanses enclosed by thick hedges and moats or wooden stake fences.   These enclosed spaces, ranging in area from 50 to 250 hectares, held by great feudal laity or ecclesiastics, with close to royal or ducal power,  were dedicated to raising domestic livestock (horses, bovines, sheep, goats…) or game (stags, does, fallow deer, wild boar).  This diversity in the animal population indicates the existence of wooded areas, prairies and floodplains.

Aside from the toponymy, the position of the actual domain of the park in relation to that of Olonde suggests the following hypothesis: Originally, the actual domain of Ourville Park, for the most part, was the feudal park of Olonde castle.  It would have then been detached in order to constitute the reserved domain of a new noble fiefdom created for a youngest child of the family. 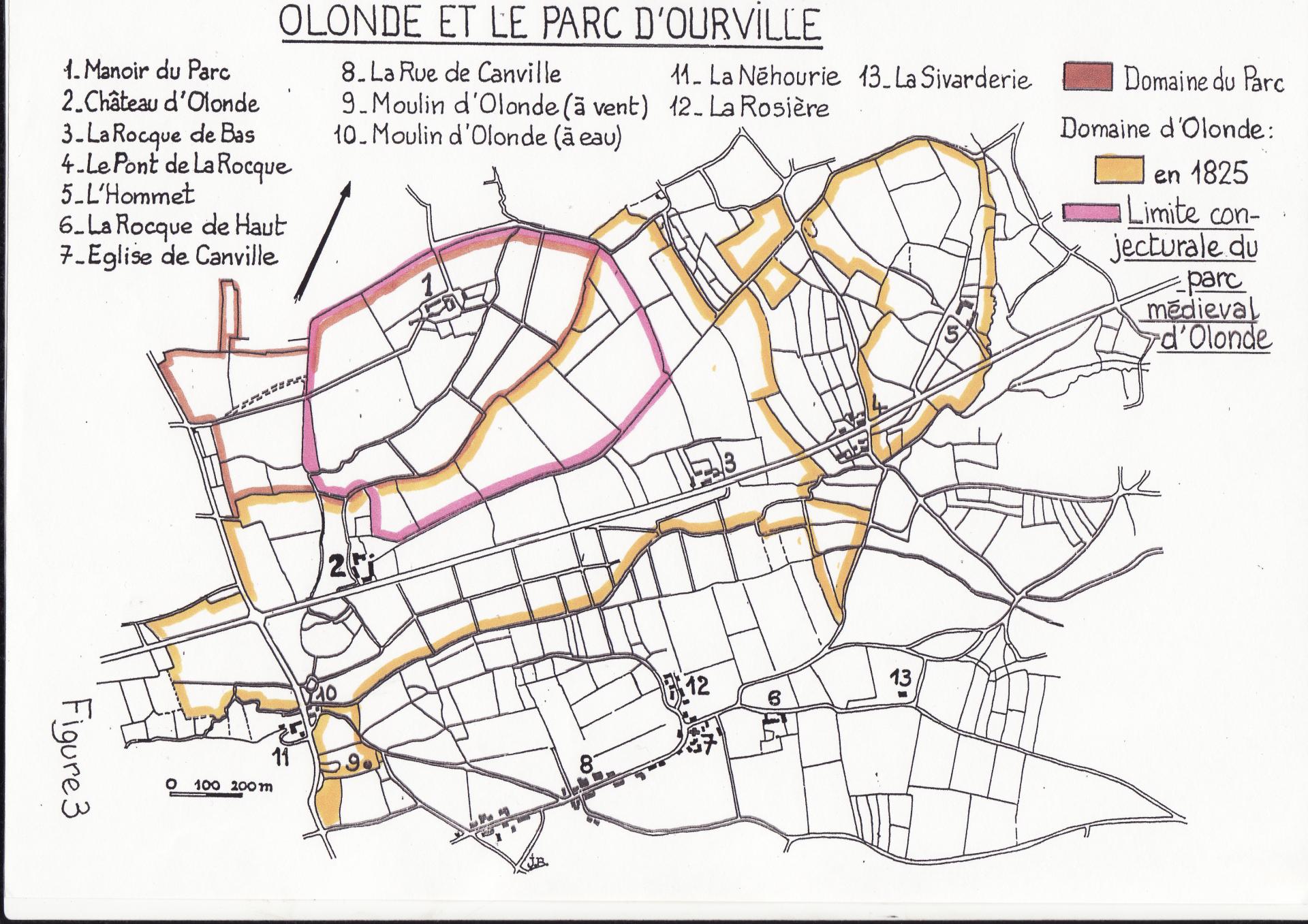 The date of this dismemberment is unknown but could have taken place between 1205, the year in which Philippe Augustus, the new master of Normandy, gave Olonde to his faithful servant Richard d’Argences (1) and 1220, the year in which the register of Philip Augustus’ fiefs tells us that Guillaume d’Argences held the fourth part of a knight’s fief close to Olonde:

You will notice that Olonde was raised up in the 11th and 12th centuries to the Honneur du Plessis (3) and that the most ancient oath of loyalty to the king for the fief of the Park (1403) mentions that its owner owes the king the service, at Plessis castle, of one armed man for ten days (4).  This may not be just a lucky coincidence.

The conjectured limits of Olonde Park, of which the area could have covered roughly 63 hectares, are indicated in the drawing below, figure 3 (5). 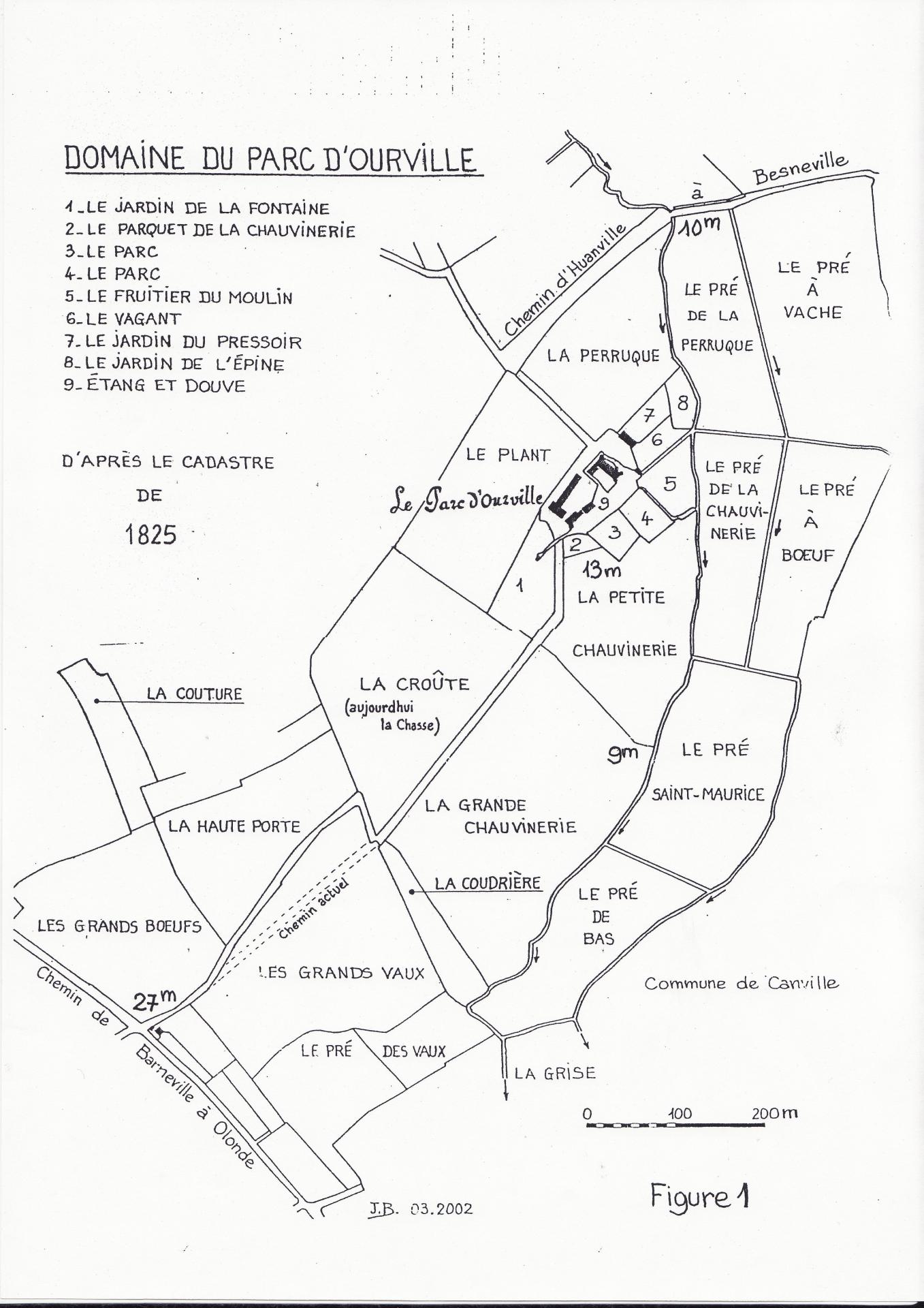 The fences are still easily distinguishably on the property.  In particular: 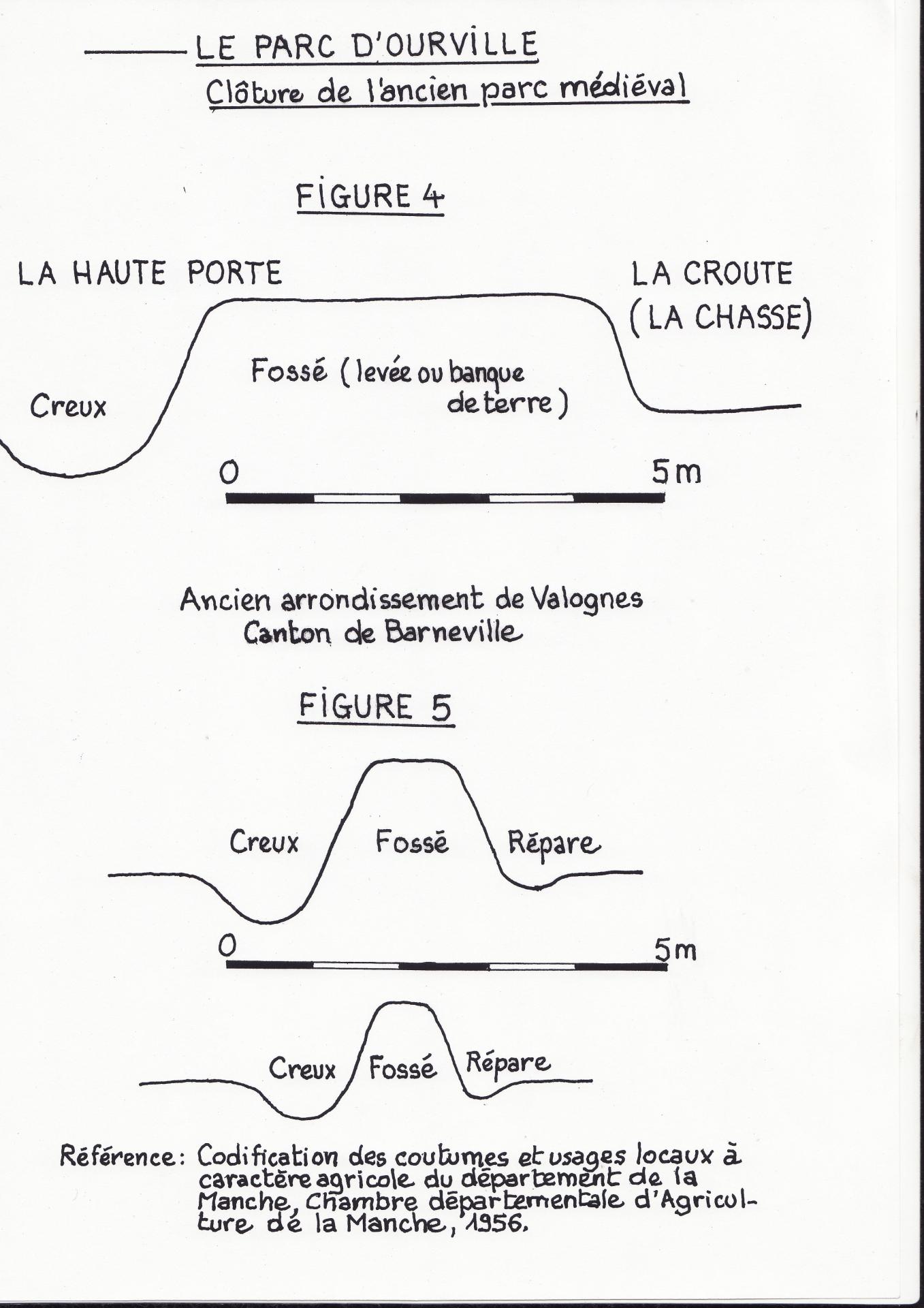 The seigniorial Park of Olonde thus did not survive, as such, beyond the beginning of the 13th century.

Next page or return to summary