This is a huge, square building in which you can discern the revisions that took place over a number of different eras, including the 20th century.

There are three distinct parts: the first (?) lordly dwelling constitutes the wing of the current building, to the left looking at the whole thing from the courtyard.  Small in size, it could have been constructed in haste after the destruction of the stronghold castle, after the annexation of Normandy in 1204.  From the period of construction, there only remains the structure of the building.  It came from a layout typical of Anglo-Norman lordly dwellings called a “chamber block” by English archaeologists: A cellar on the ground floor above which is found the bedroom of the lord which is accessible by a straight, exterior staircase on the façade.  The handrail of the staircase does not go all the way to the bottom in order to allow the lord to easily mount his horse, which a servant would bring to the foot of the stairs.  This building includes a dovecot in the thickness of the gable and the openings would have traced the layout of the grounds that made up the fief of the Park.  It’s an external sign of wealth for the lord. 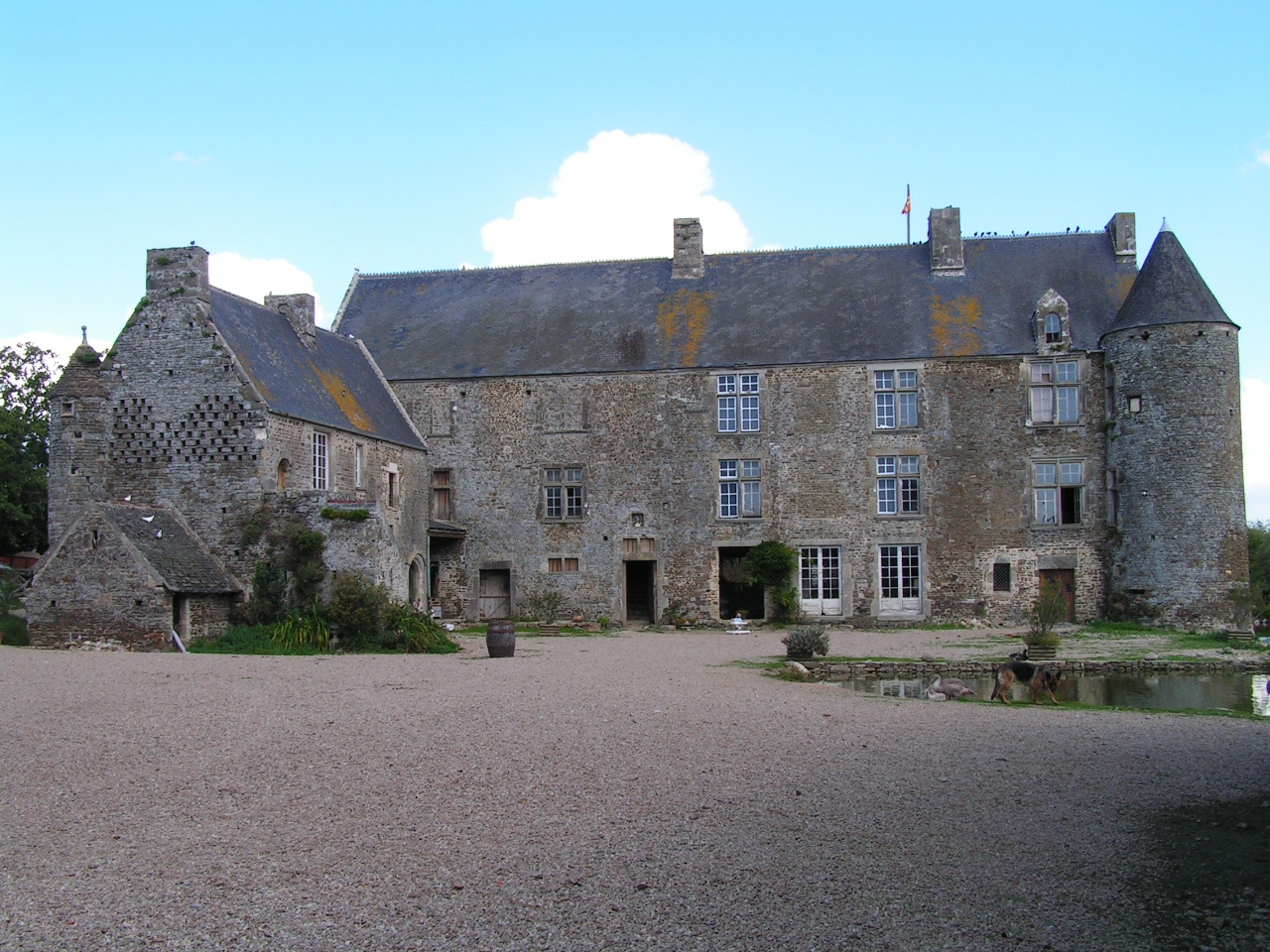 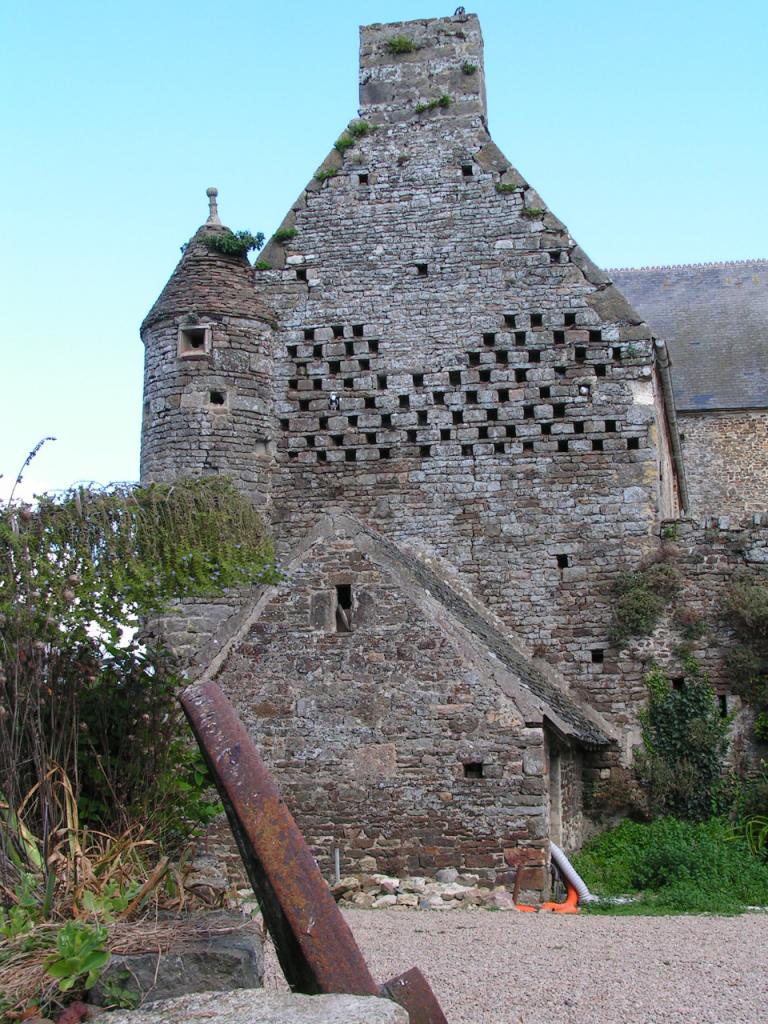 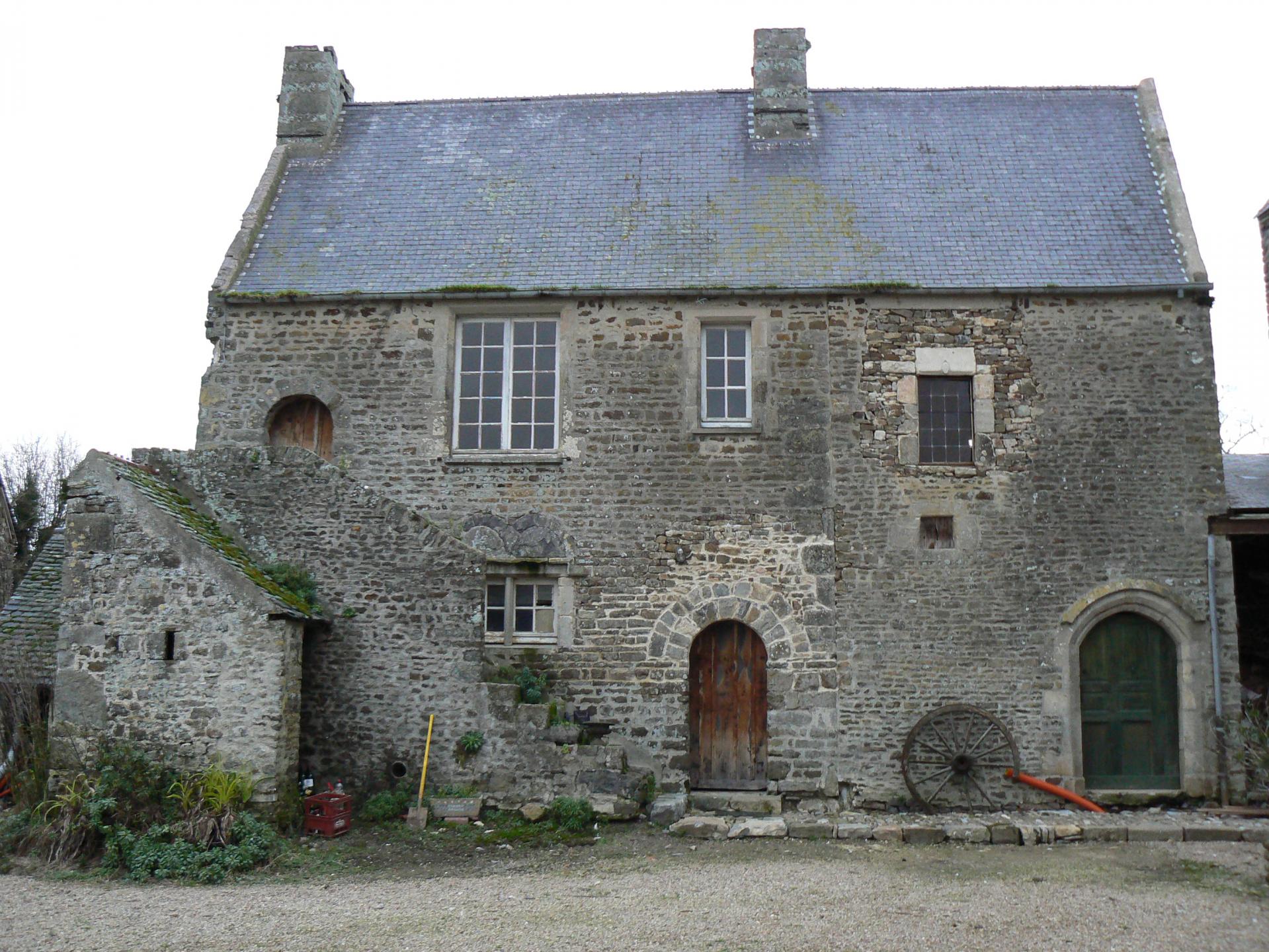 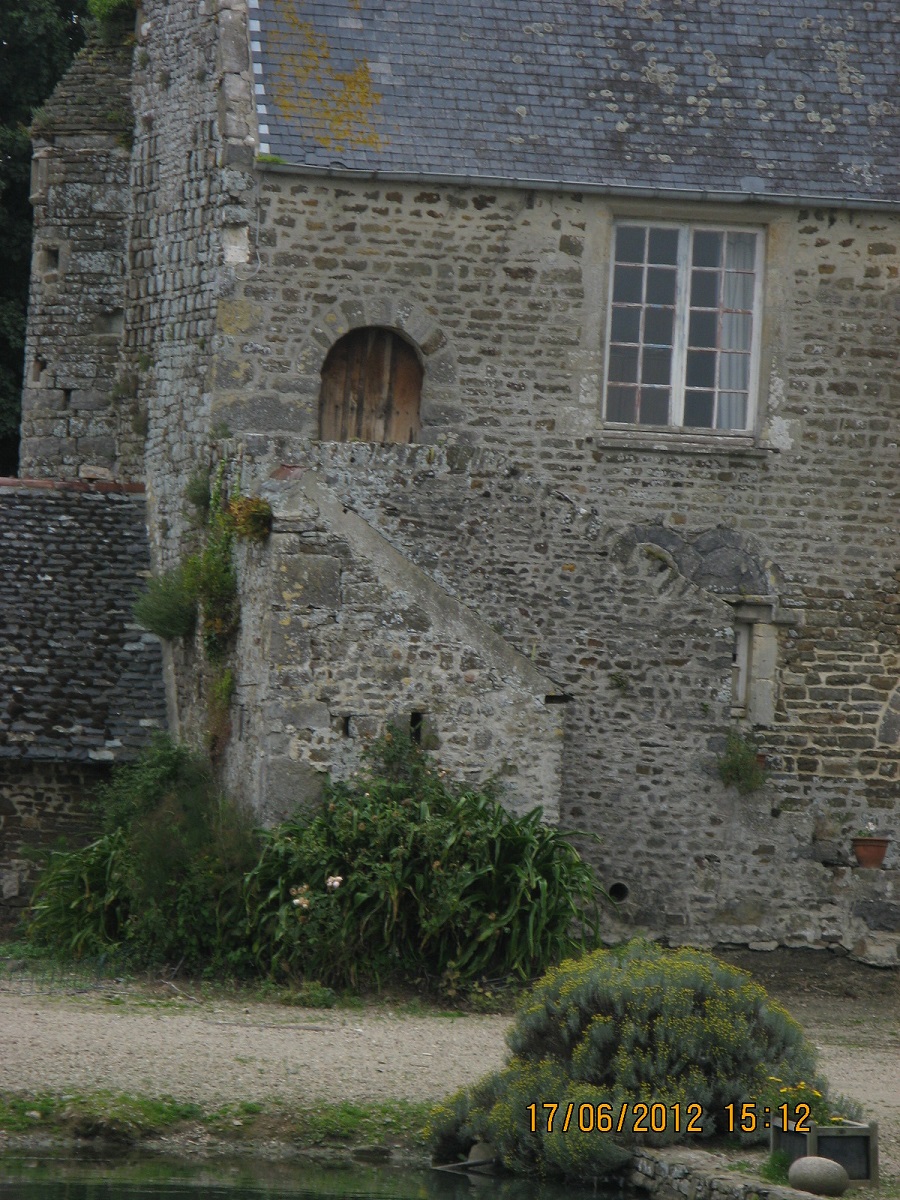 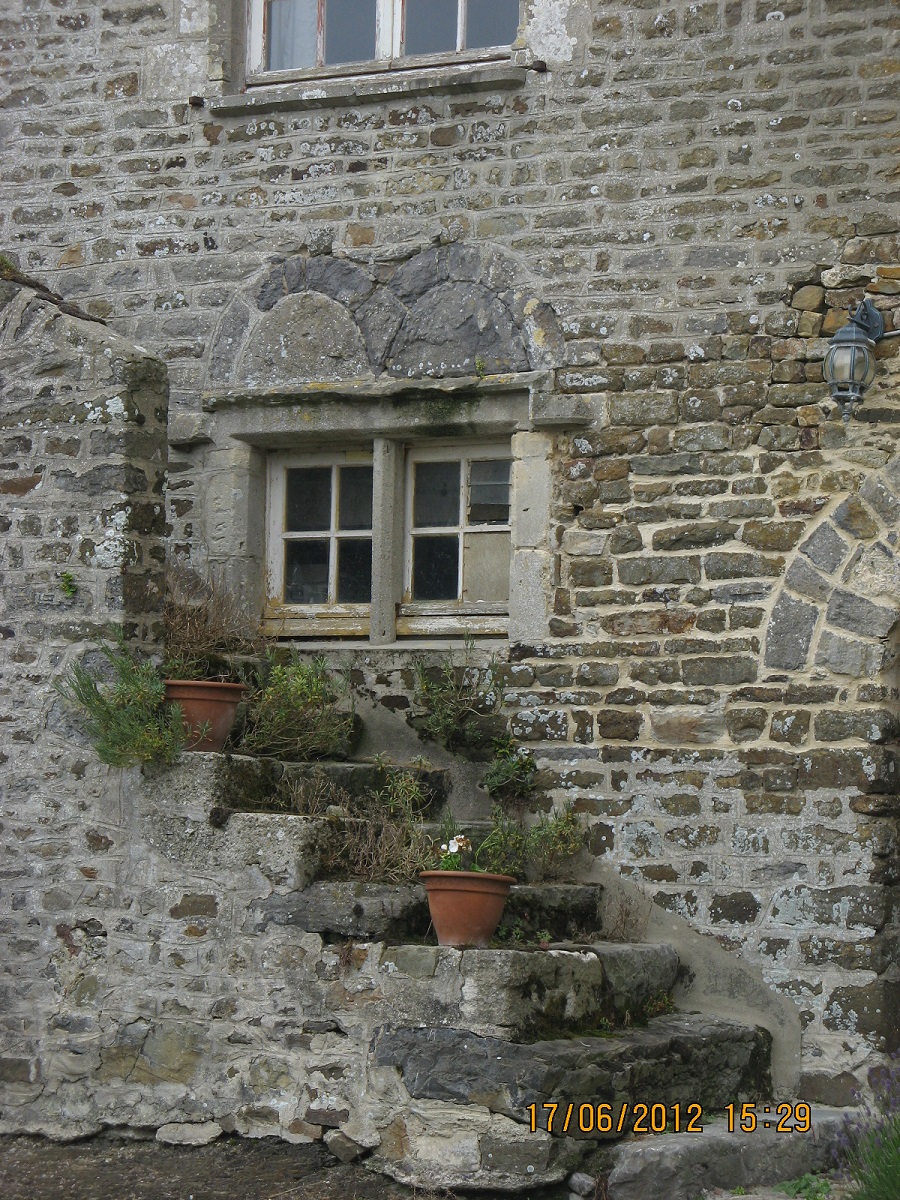 The bartizan of this gabled dovecot, accessible from the ancient lordly chamber served as a latrine and also contains niches for pigeons.  It, too, is pierced with a musket-slit and thus served as a defense.  The small recess in front of the stairs is also pierced with numerous slits but is of a later construction.  At the foot of the gable dovecot, there is an area that harbored an oven, which has today been turned into a smoking room.  The master of the place would have occupied these small loggings during the construction of a real master’s residence.  It then remained, nonetheless, a warm and comfortable logging reserved for the exclusive use of the Lord of the Park.

To Continue on the Guided Tour of the Residence, click on the arrow below.

Facing the courtyard, the most ancient part of the great seigniorial residence is the part to the right.  There you will find chimneys that may date to the 14th century and are similar in style to those of the castle of Saint-Sauveur le Vicomte.  The only two great windows that are authentic, with mullions and latticework on the molding and decorated with columns, are those adjacent to the tower, and these can be dated to the 15th century.  They were opened in the façade in an era in which there were changes in the layout of the different interior levels of the building.

The windows of the tower that underwent restoration contain the coat of arms of Philippe-Auguste and William the Conqueror.  There were finished at the beginning of 2004 for the 800th anniversary of the annexation of Normandy to the French Crown.

The giant openings of the central part are recent and were built in the 50’s.  A photograph from the beginning of the century shows us the existence of four small windows and a door built in the 1800’s in place of the current system.

The central part of the building only contained two rooms up until the 17th century.  The current second floor is only an addition of the 17th century.  The openings in this central part of the façade looking onto the courtyard are modern.  Mullions, latticework, windowsills and lintels are of concrete casting and were done in the 1950’s.  There remains among the ancient openings the beginnings of a relieving arch, to the left, on level with the windowsill of the first window.  It is probably the remains of the relieving arch of the entrance door to the great room of the ground floor, behind which we were surprised to find a pit, which could be covered with a trapdoor and appeared to have been a very original defense system since it was in the room itself.  We have found in excavating this pit, iron balls from the religious wars as well as pieces of rock projectiles from the Hundred Year’s war.

The left section of the great house is a construction, or more likely a rearrangement, which took place later on.  The regular windows, without decoration, with mullions and latticework in square sections are characteristic of the 17th century.  Most of these openings were closed up from the beginning of the 19th century on, doubtless in connection with the taxes levied on the number of openings in the façade of a building. 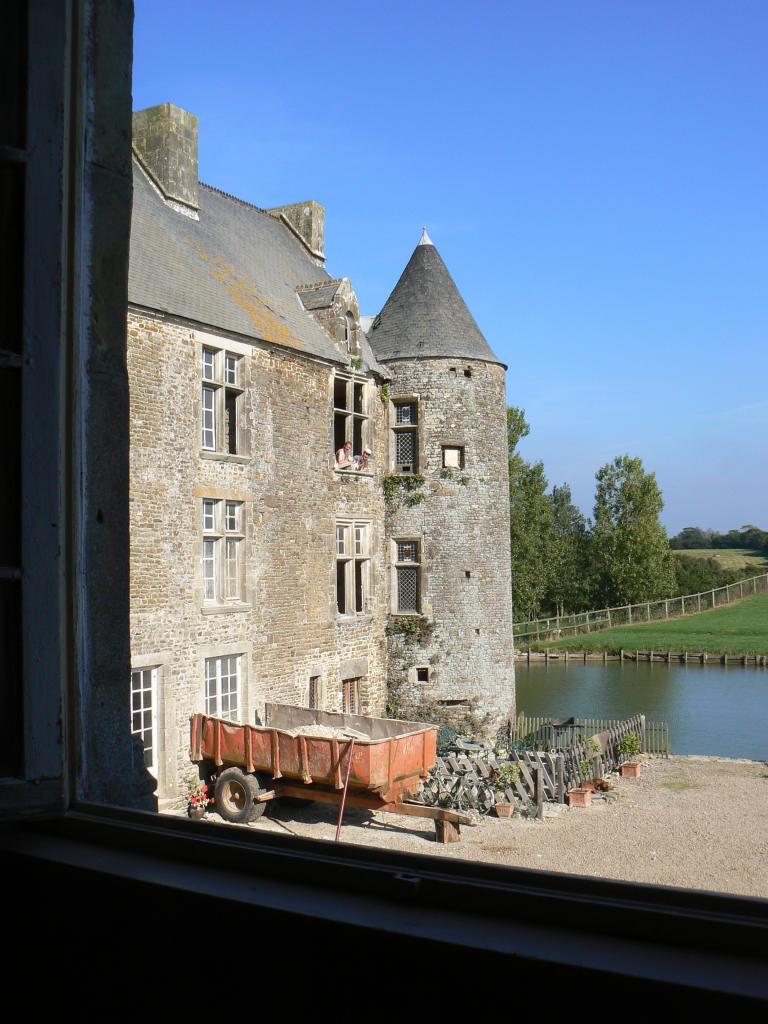 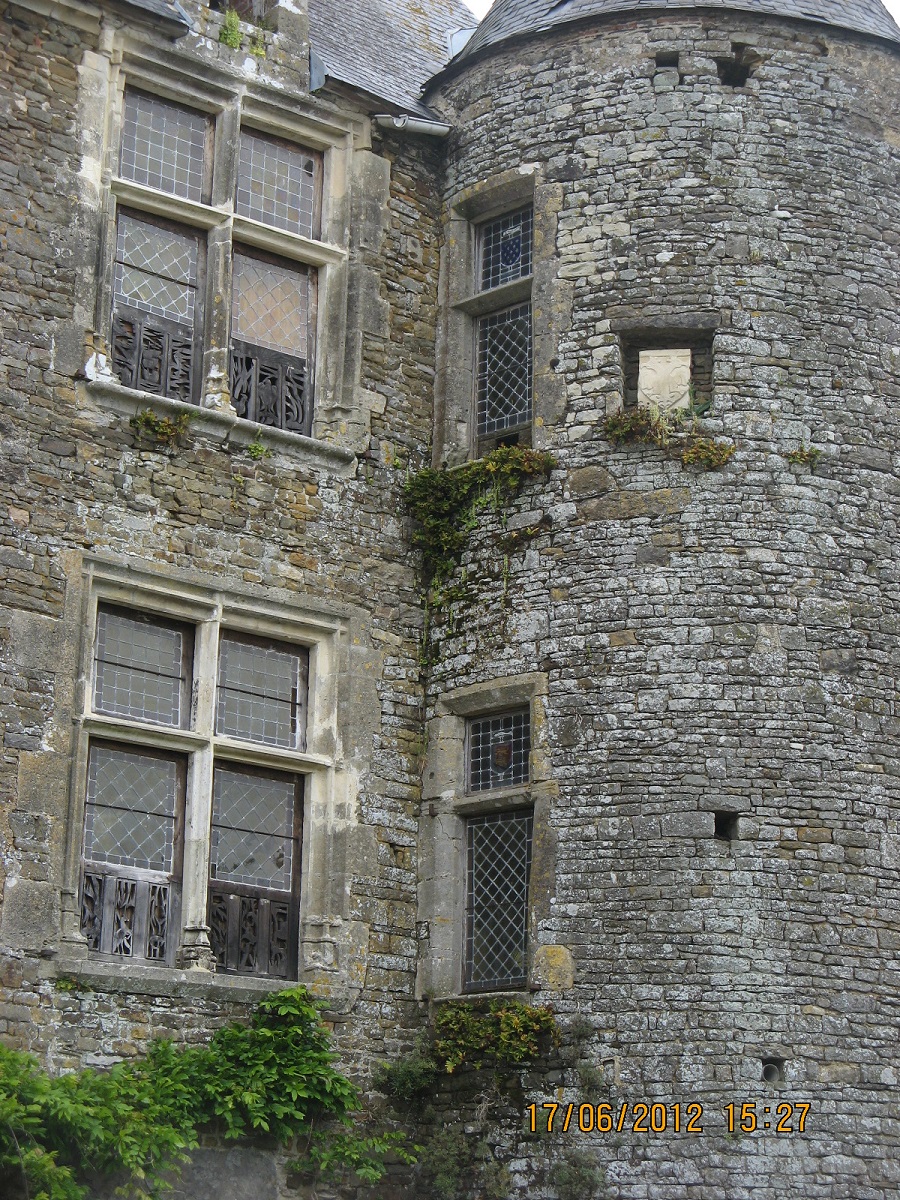 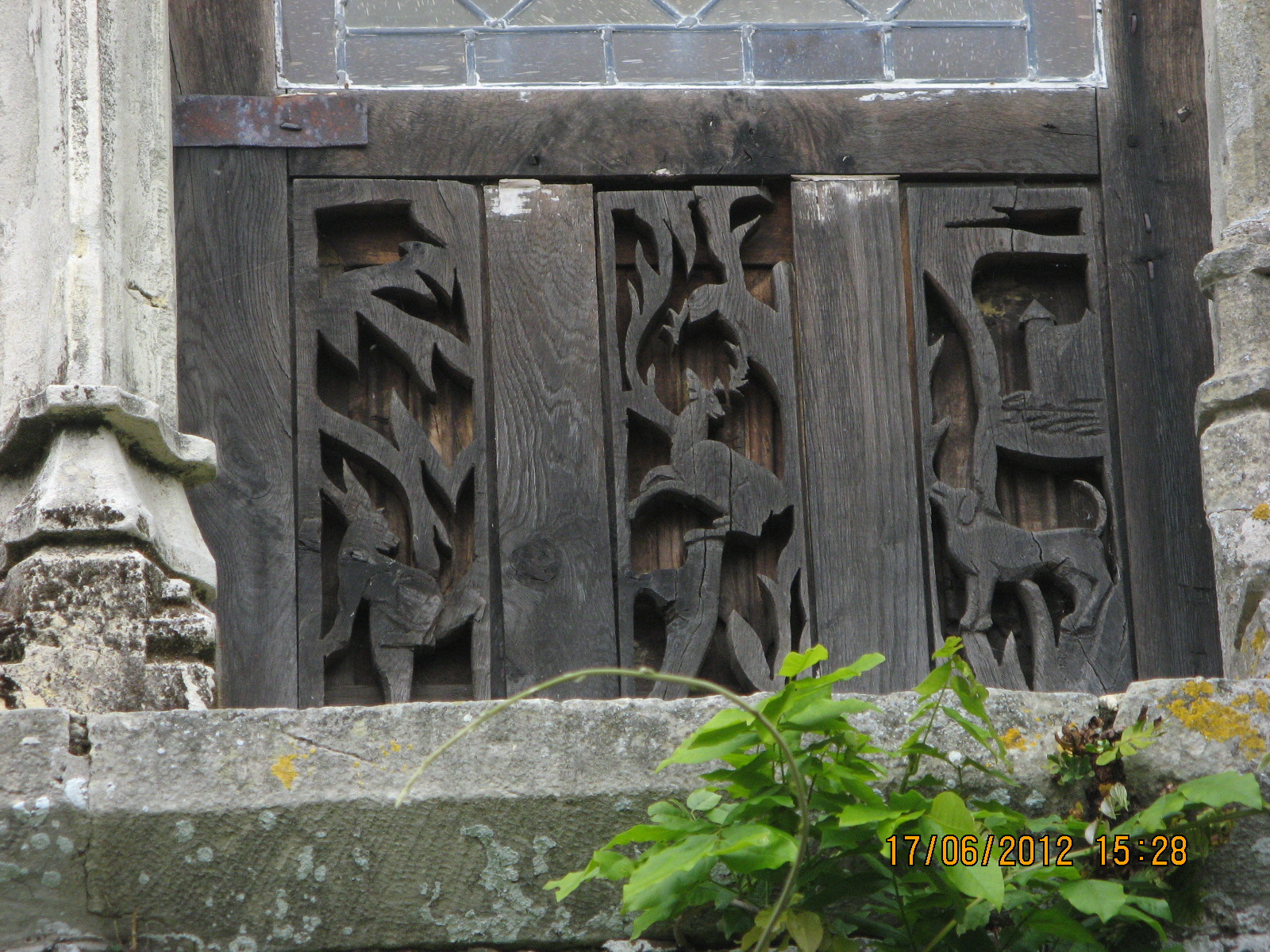 In walking through the building by the gallery circumventing the staircase to the right of this extension from the 17th century, you pass in front of a chimney, which is rather oddly placed overhanging this staircase.  This appears to have been inserted from the beginning in this gable of the great house, anticipating thus a future extension.

Some elements witnessing to the ancient layout of the place thus remain to this day. 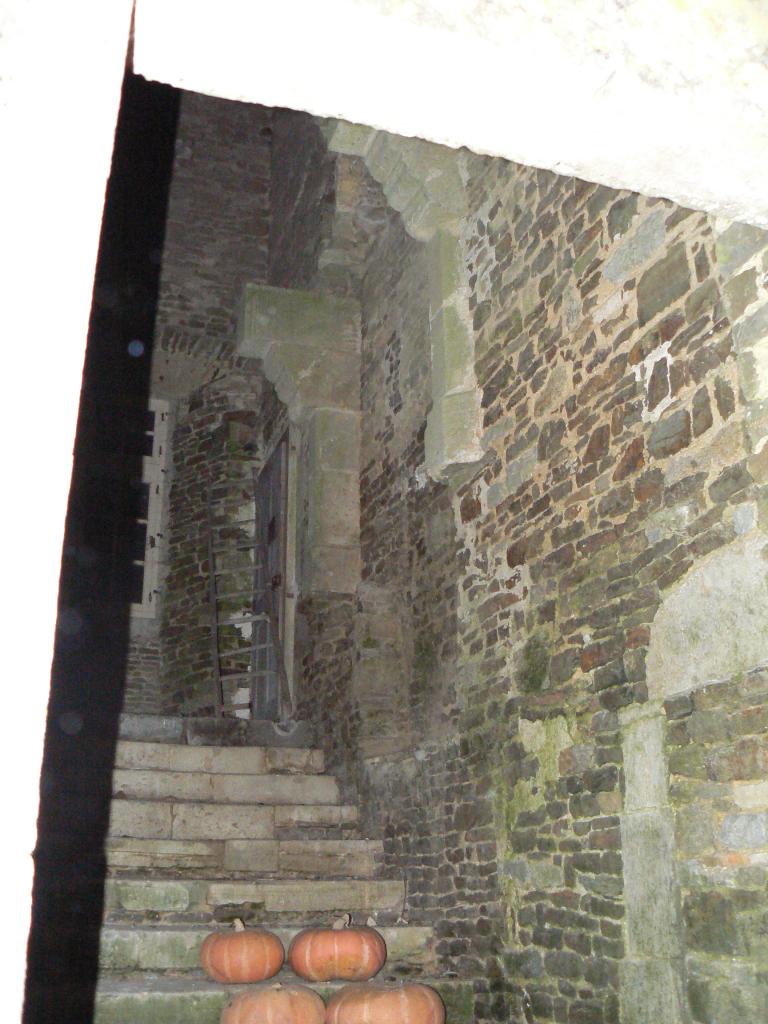 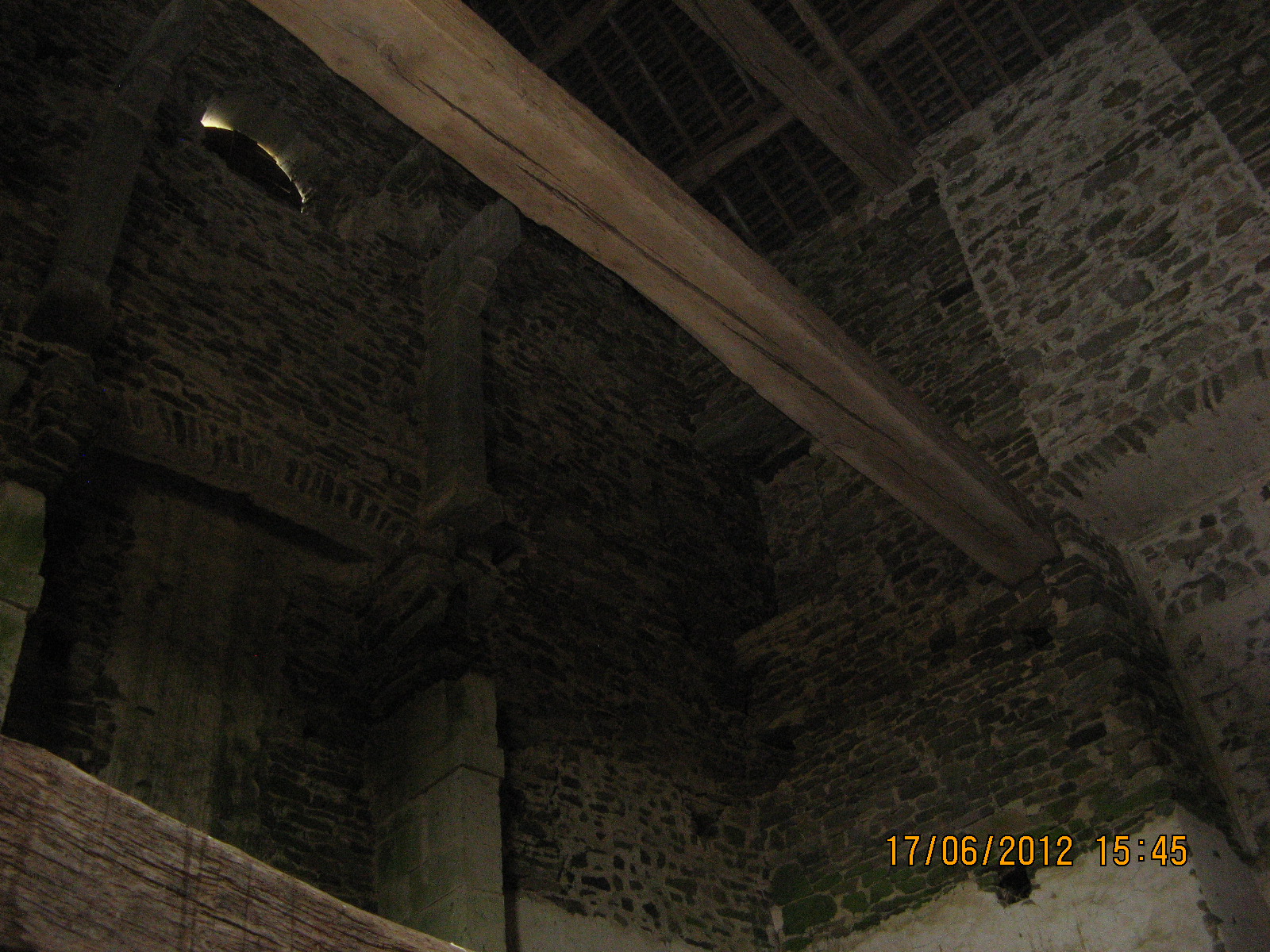 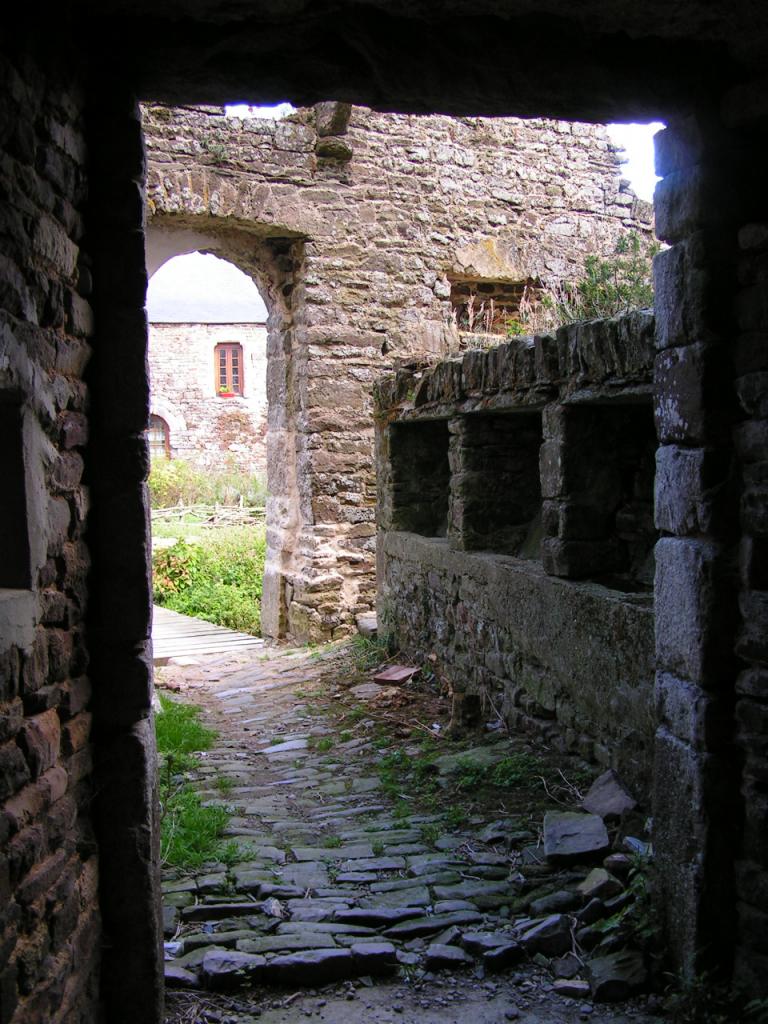 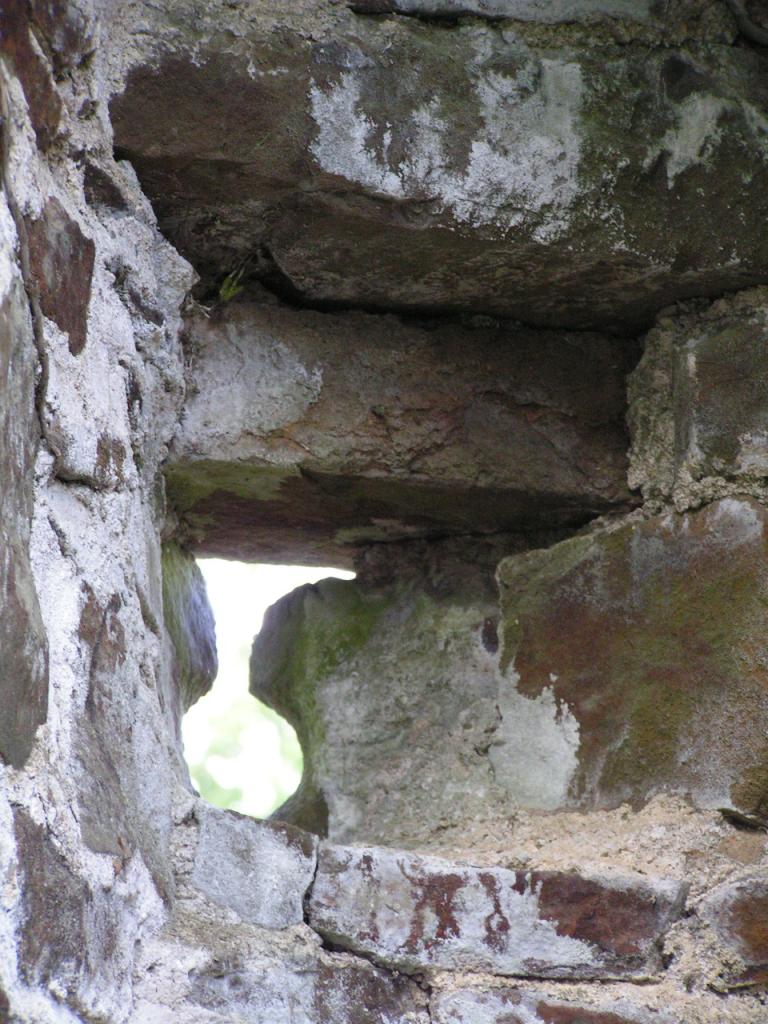 At the end of the corridor, you arrive at the fortified part of the seigniorial residence overhanging swamp.  This system was built in order to protect against the events of the religious wars and also the bands of unemployed mercenaries who terrorized the region after these wars.  A number of musket balls were found in the surrounding fields!

The defense system is curious and unique; it is comprised of an overhanging wall riddled with many slits, which allow a view of the entire northeast of site, and it is furnished with a small bartizan.  It also contains a small defensive tower, doubtless similar to that of the Old Carriage house.  The outer wall also had a small courtyard where pigs were kept (you can see the relics of troughs).  One could penetrate into this fortified outer wall by a small, raised drawbridge of which there still remain some traces of the hoisting system.  Its raising allowed for passage by horse.

The big tower, which seems to give itself airs of being a dungeon, imposes its mass on this very protected side, overhanging the marsh where one might reasonably fear an attack.

From behind the loggings, above and beyond the defense system, the point of view offered close to the small mill shows the number and spectacular importance of the towers.  The one farthest to the left, visible from the façade on the courtyard side, creates an extension of the principal chambers of the Manor.

We hope to regain on this fortified, posterior façade and on the east gable of the residence the austere character in part lost during the work done in these last 40 years.

The moats that we found filled in on our arrival once again encompass the residence.  It only remains for us to close up the last abnormal modern openings in the defense system.

Our wish is to rediscover the Park as it appeared at the beginning of the century, before its unfortunate modernization.

For this we are basing our plans on rare, iconographic documents in our possession… 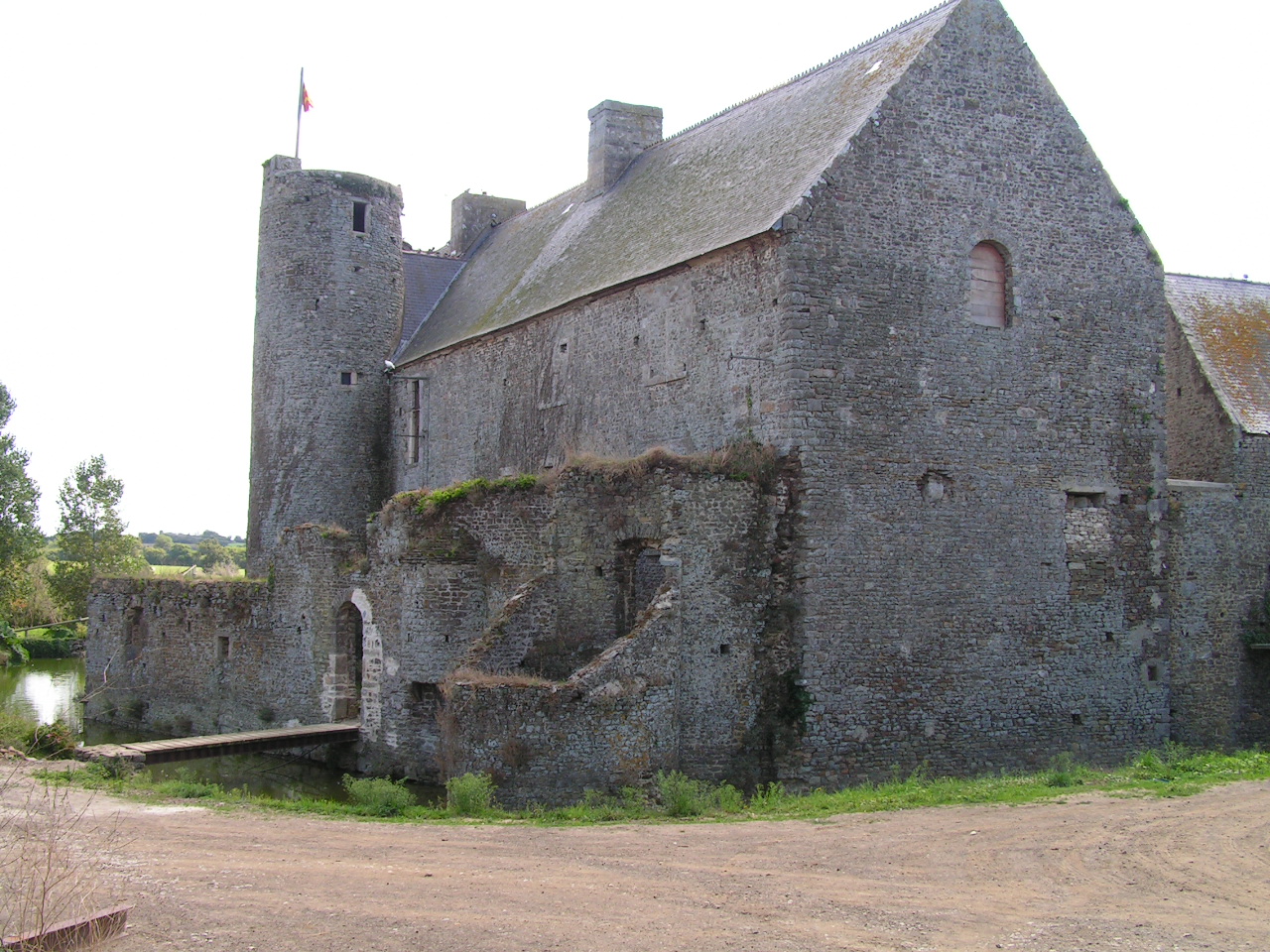 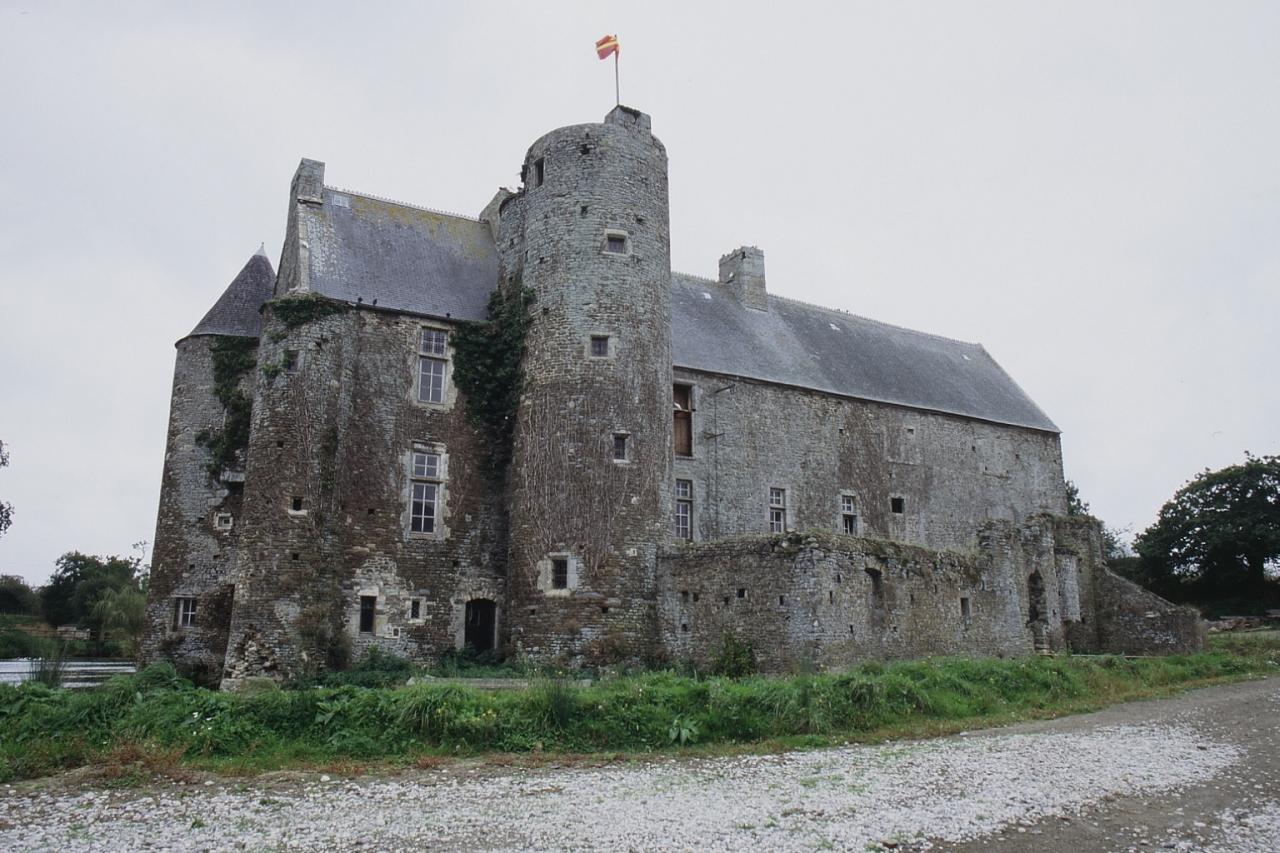 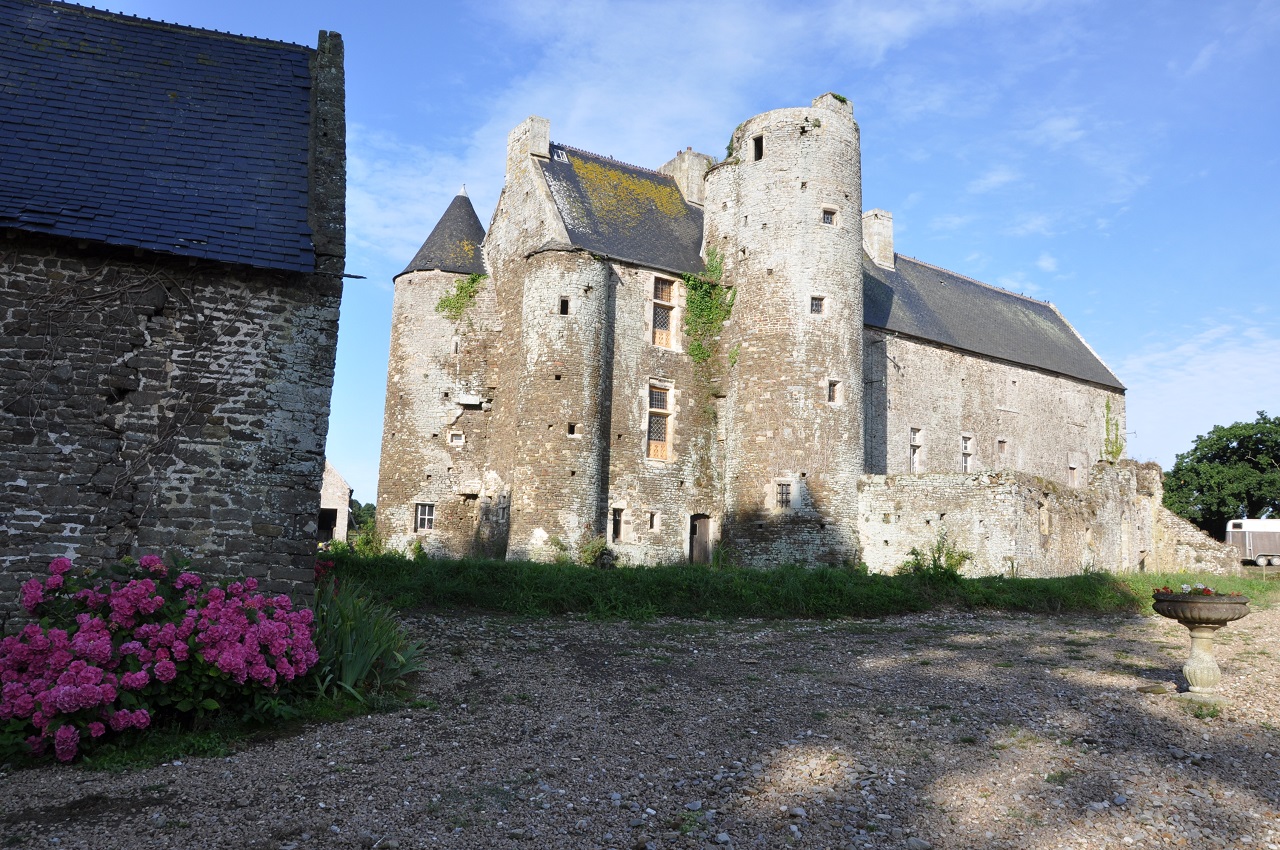 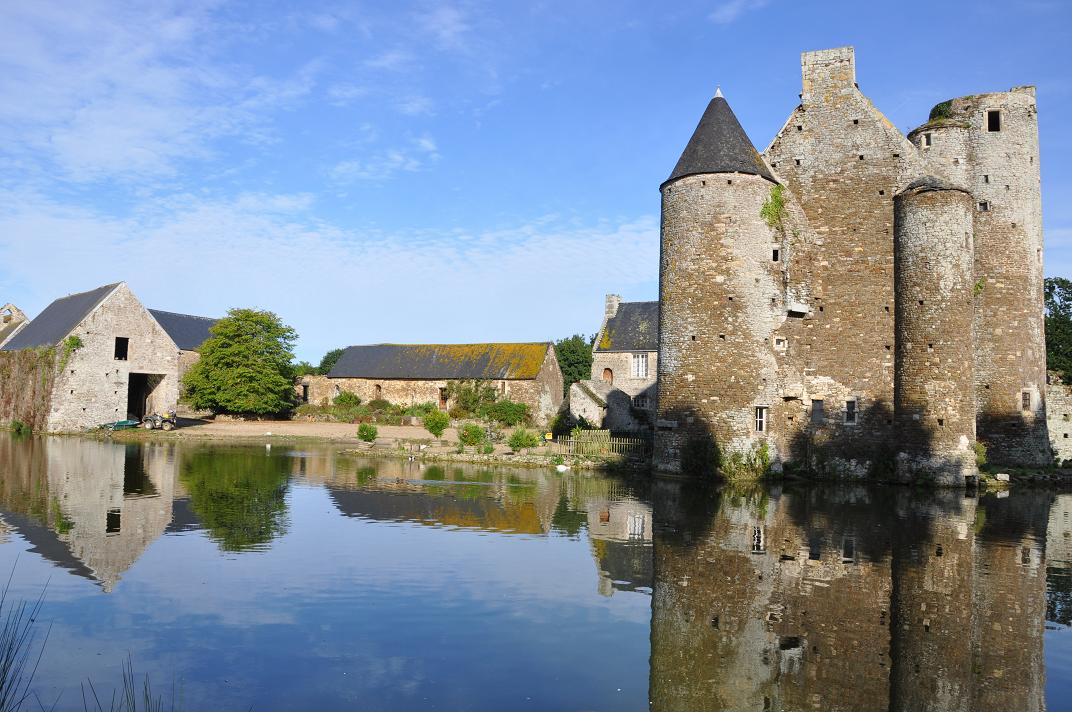 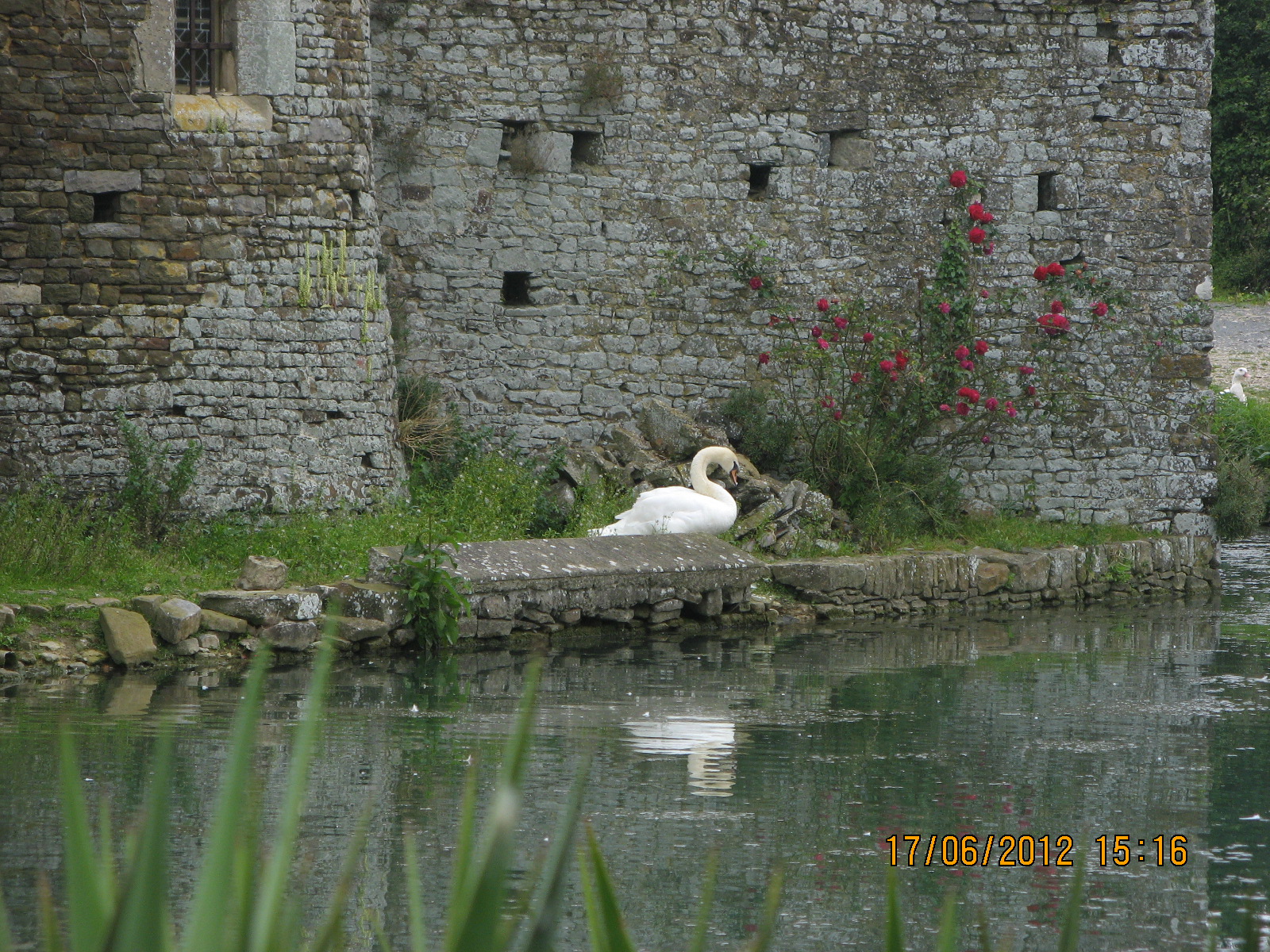 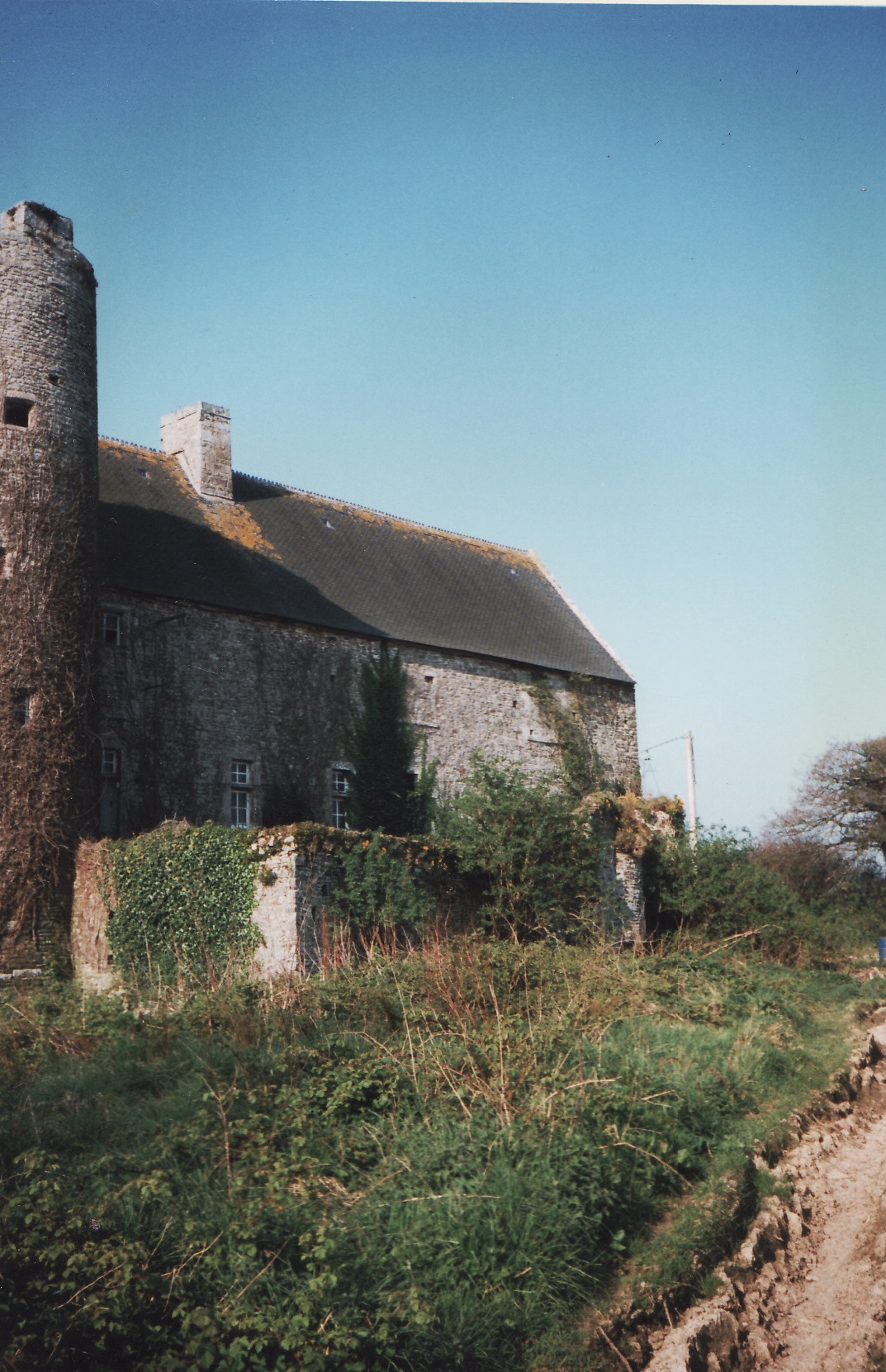 Continue on the guided tour, Go to the Interior of the Residence or Return to the welcome page of the Guided Tour.